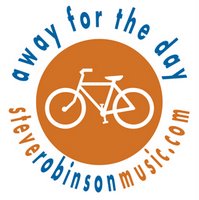 Getting away for the day? Make sure you're properly dressed and accessorized for the occasion. Pop over to Closet-Folkie's Closet and have a look at some spiffing T-Shirts and sensible Tea Mugs.

There are several designs to choose from. Among them, is the Emma Robinson/Don Moore-designed Sunshine Drenchy Logo; the Away For The Day CD artwork, and the tasty retro-looking design above.

Thanks are due, again, to my long-suffering graphic artist friend, Don Moore, who has worked tirelessly to help me bring all these website and CD ideas to fruition. The man is a saint, and I couldn't have done any of it without him. Now you know who to blame.
Posted by Steve Robinson at 8:59 AM No comments:

Is that your vinyl answer? ... I'm hesitant to enter the fray and lament the passing of the vinyl record album. For one thing, it doesn't appear to have totally gone away yet. Witness the recent upsurge in bands pressing Limited Edition vinyl versions of both albums and singles.

I'm wondering how many of the fans purchasing these releases actually own turntables, but I suppose it really doesn't matter. They certainly have appeal as a curio-type collectible for a die-hard fan, and even if you can't actually play the thing, they still look considerably cooler than a CD or an MP3 title flickering on an iPod screen.

Speaking of iPods, one such monster will be winging its merry way into the Robinson household this Yuletide season. My 9-year old daughter informs me that she'll be distraught, nay, inconsolable should one not be in her stocking this year. Can't have that, can we?

I have to give the girl credit though--she may be enamoured with all things MP3 and USB, but she can still appreciate the aesthetic beauty of a good old LP. So taken, is she, with my collection of Beatles albums that she now has three of them mounted and framed on her bedroom wall. The thing is, I don't think she really associates these striking 12x12 images of the fab ones crossing leafy London streets, or all dressed up in their Peppery finery, with the songs contained within; they're simply like cool little posters to her. It's amazing to think that even though she loves all things Beatle, she's only ever heard their music on CD. If my trusty old turntable hadn't bitten the dust years ago, I'd dearly love to be able to actually play some of these records for her. It would be a great opportunity for me to do my best middle-aged-father knows-best routine; rocking back on my heels and imparting pearls of wisdom like -" There...that's how this music was meant to sound", or "That's bloody analog that is; can't beat it. None of your namby-pamby sterile digital shrillness there, love. Ah, just listen to that..."
Of course, she'd probably spoil it with a "What's that crackling sound, dad?" Fair's fair, I suppose.

With this particular bee in my bonnet, though, I've taken to leafing through musical equipment catalogues, of late. They all seem to offer several turntables for sale. Many have USB connections for easy computer hook-up, presumably so that we can take these vintage aural masterpieces of the analogue domain and compress the life out of them as we import them into our vast, squashed digital libraries (I know, I know--it's progress).

"Do you know what a turntable is, Emma?" I'd casually inquired of my little Beatle fan-in-training, over the weekend.
"No" she replied, off-handedly.
So, reaching for a nearby catalogue, I showed her a photograph of one of the turntables on offer.
"Oh-that's a disco machine, dad" she scolded.

Trying to ignore her allusion to DJs, and hoping against all odds that I could somehow make her aware that these beautiful devices were once the primary way of delicately delivering music to the ears of a generation of music fans, I prompted her with a rather hopeful -"Yes, but you know what you put on them, right?"
" Yeah--your hands", she offered, as she reached out and mimed a circular motion with both palms, redolent of a DJ scratching. Despite being crestfallen, I howled with laughter, and by the time she'd delivered an onomatopoeic "Whizzy-whizzy" for further comic effect ( with the flair and ease of a veteran comedian, I might add), I was in convulsions.

So, of course, the catch-phrase of the week in the Robinson household is "Whizzy- whizzy!", and it gets a laugh every time. Enjoy it while you can, little Miss Robinson, because when I finally get around to ordering that brand new Technics Disco Machine, you're going to be in for some serious listening.
Posted by Steve Robinson at 10:53 AM No comments: