A heartfelt thank you to Andres Kabel, for his rather eloquent review of Shadow Play. It's the first one out of the gate and it's a beaut. Thank you sir!

Posted by Steve Robinson at 6:50 PM No comments:

What we did on our Covid holidays... 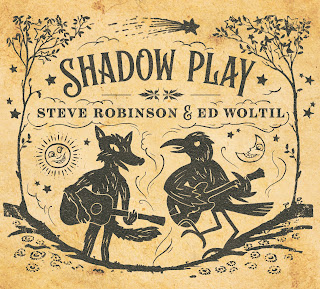 Cycle, the last Steve Robinson & Ed Woltil release back in 2015 holds a special place in my heart. A fair amount of blood, sweat, tears and grinding of teeth went into it. As I remember, we originally envisioned it as a bloated double album set; almost a willful attempt to be as unbearably pretentious as possible. Ultimately, common sense prevailed as we jettissoned several songs and a rather pompous instrumental segue section, ending up with a rather more sensible 12-track album (13 tracks, if you count the opening 20-second prelude that somehow eluded the editing scissors.)
Shadow Play proved to be an altogether smoother affair. Songs came together quite quickly and it seemed like we zoomed from exchanging early sketched song ideas to hashing out final mixdown decisions in the blink of an eye. I really can't take much credit for this; much of it was down to Ed's alarming work ethic and otherworldy musical focus. His instincts are such, that instrumental touches he adds to our songs almost always seem to hit the mark. He does it so quickly too. I mean, I'm really quite happy with my musical contributions to a slew of the songs we've worked on together, but I also know they're usually a result of considerable trial and error. I'll add and replace guitar and vocal parts over a few weeks until I feel I've landed on the right approach. Ed, on the other hand, will receive a song of mine via email, and the next day he'll toss it back painted with instrumental colours that I didn't even realise I wanted. Mental.
Now, I don't know if this album is better than Cycle (whatever that might mean) but for me, I think that making this one might have been even more enjoyable, in a way. Whether it's due to getting older and more sappy, limping through the jarring stops and starts of the pandemic/lockdown, or simply the realization of just how special it is to have a musical foil like Ed to work with, I'm really not sure. I do feel like our hearts are in it though, and I just treasure it.
The album will soon be available at the usual streaming sites (iTunes, Spotify, Apple Music etc) and hard copies in a swanky gatefold CD wallet with lovely artwork courtesy of Ed will also be available at Bandcamp. Speaking of which, we’re set up for pre-orders of Shadow Play at the Bandcamp site. You get 2 tracks now (a power-pop nugget called Kickstart and a rather bouncy, Beatlesque gem called Life On a Trampoline, which features XTC’s Dave Gregory on guitar duty), plus the complete album the moment it’s released. Have a listen here:  Shadow Play

Posted by Steve Robinson at 7:42 PM No comments: