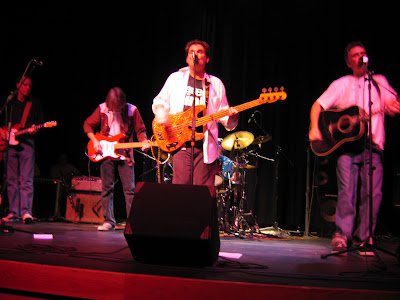 Just a quick update for you on the upcoming Headlights/Ditchflowers show at the Largo Cultural Center on Saturday, Feb 9th.

There has been a time change --the show is now scheduled to begin at 8:00 pm, rather than the previously advertised start time of 7:00 pm. I'm not sure how this will affect my scheduled solo spot at this point. It will probably be a bit of a squeeze (no "Up The Junction" jokes, please) but there may be time for a shortened mini-set. If not, I'll just have to relinquish the solo spotlight this time around and save my newly-penned, Australian-themed Folk-Rock Opera, "Pommie" for a future date. Not quite so disappointed now, are you?

Tickets for the show ($18 advance/$21 day of show) are available in person at the Box Office, or by calling 727-587-6793. More details about the venue/map/directions etc. are available on the website

There has been a lot of gossip surrounding this particular Headlights get-together. Some are touting it as the final show (some may even be praying, I don't know); others have suggested that it might be time to record some new material. I have to admit that I've long felt that as a band we never really managed to hit our stride in the studio. We certainly managed to conjure up a little magic on stage on occasion, but considering how long we played together, I think that we're woefully under-represented by our recorded output. I personally wouldn't mind the idea of bolstering the old back catalogue a bit. I know I have a couple of songs that I've not recorded as of yet, probably because they felt more like Headlights songs to me. There's a part of me that likes to think that schedules permitting, and pending suitable alignment of the stars, that I might be able to have a bash at them with the lads. Who knows?

Speaking of having a bash, there's a bit of a "do" at Dave's Aqua Lounge this coming Saturday, Feb 2nd featuring The Ditchflowers, Lorna Bracewell, Ronny Elliott & Rebekah Pulley, and Have Gun Will Travel. It's all for a good cause too. I'll leave the spilling of the details to Ditchflower, Ed Woltil -- everyone's favourite local, rather tall, uber-talented musical all-rounder, who despite the fact that the closest he ever gets to the Netherlands is when his wife picks up some imported Edam cheese from the deli, nevertheless has a really cool Dutch-sounding name.

What follows is an exerpt from a recent Ditchflowers bulletin. Take it away Ed...

"All our local fans are, of course, familiar with WMNF 88.5 Community Radio, the staunchest supporters of Bay Area musicians on the airwaves. Many of you, however, may not know about BAAMO (Bay Area Arts & Music Organization), a not-for-profit outfit that exists for the sole purpose of helping to promote Tampa artists. Gotta love ‘em — great people.

BAAMO’s major annual event is the Florida Bandango, a showcase of Tampa Bay music and musicians at the world famous South by Southwest (SXSW) Music Conference in Austin, Texas. The incorporators of BAAMO have hosted this event since 2003. The purpose of the Florida Bandango is to bring exposure to local musicians from the music industry and music press attendees of SXSW. Over 500 individuals attended the 2007 Florida Bandango. WMNF is another staunch supporter in helping to make this event a success.

This year, The Ditchflowers are proud to be one of the five Tampa acts participating in the 2008 Florida Bandango. Along with Ronnie Elliott & Rebekah Pulley (performing as a duo), Lorna Bracewell, Giddy-Up Helicopter, and Sarasota’s Have Gun Will Travel, we’ll be headed off to Austin to perform on March 12.

Another great thing BAAMO does is release a CD compilation of great local original music. The latest, Cheatin’ Heart: Tales of Lies & Love, features the above artists and more, and is hot off the press and available soon. Next week, for instance, you can pick up a copy at Dave’s Aqua Lounge when you drop in to check out all the above artists (except Giddy-Up Helicopter, who are unable to attend) performing in a special fundraising concert. That’s Saturday, February 2, at Dave’s Aqua Lounge. A suggested $10 donation will help us starving artists pay our way to the musical promised land of Austin, Texas (hey, travel’s expensive). Hope to see you there if you can make it-- all of these musicians are exceptionally talented, and this promises to be a night of great music, fun and camaraderie (show details below).


Gotta run...thanks again for your support.