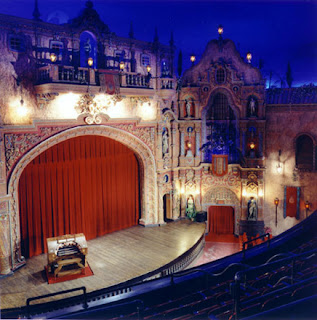 Richard Thompson, w/ special guests Steve Robinson & Ed Woltil - Tampa Theater, Friday, Feb 3rd.
I love this theatre. It's gaudy and beautiful at the same time. A bit like my adopted homeland, you might say. You might. I wouldn't, of course; might come across a trifle haughty and judgmental. A bit like the old country, you might say. You might. I wouldn't, of course; it might appear fickle and ungrateful. A bit like the French.
Jesting of course. I don't have anything against France, or any other nation come to that (except Argentina, of course). Sometimes you just have to have a laugh don't you? Joie de vivre and all that.
What the hell am I talking about? I have to wonder sometimes. What I should be talking about is the upcoming show with the legendary Richard Thompson this coming Friday. My musical comrade of Dutch extraction, Ed Woltil, and I are huge RT fans and we're both well chuffed to be opening the show.
The doors open at 7 pm and Ed and I go on at 8. We'll be playing a selection of songs from our upcoming Sunshine Drenchy CD release, Cycle, and then settling in to enjoy a set from one of our musical heroes.  Should be a lovely evening.
Hope they move that big organ from the stage though. Looks a bit intimidating to me. A bit like Germany.
Posted by Steve Robinson at 8:57 AM No comments:

...and sometimes it's really complicated, messy and ragged, often taking a long time to mature. A bit like songs, I suppose.
The chords and melody of this song were married back in the early 80s. I was still living in England at the time and had inherited an old upright piano that I used to plonk away on, gamely trying to figure out how to play Gilbert O'Sullivan's Alone Again, Naturally. (Yes, I've always been quite the hipster.)
Love is Real was the first original song that I came up with on the piano. Now, if that were entirely true, I might be quite proud of myself. As it happens, I cringe with embarrassment whenever I recall the original lyrics I came up with. Mercifully, I've blocked out many of them, but I do remember that the working title was "After All", with the chorus being built around the woeful phrase - "Love's not all ... after all". Ugh.
Yes, it was all written from the dour point of view of a lover spurned and giving up on the idea of real love. It wouldn't be so bad if it had been based on a real life experience, and I was simply venting or expressing true sorrow. Alas, I rather think it was merely a half-arsed, self-indulgent exercise in dopey doe-eyed singer-songwritery. Even then, I must have known it was crap, because it sat untouched for some 25 years or so.
Truth be told, I was always quite fond of the melody and the chord progression, and thought it had potential, and I'd long intended to rescue it from the scrap heap and write some new lyrics for it. As it turned out, it took me until 2006 to actually get around to it. Talk about a lazy songwriter!
As it happened, I'd been working on a bunch of songs that would ultimately surface on the Undercurrent CD, and for grits and shins, I decided to record a snippet of After All (Ugh) to see if it inspired anything. Like I often do when coming up with lyrics, I set up the vocal mic and sang stream of consciousness-type gibberish over the recorded instrumental track in the hope that something remotely usable might pop out.
This process can be alternately funny, frustrating, fruitful, futile, and various other terms sometimes beginning with "f". It can also be particularly harrowing for anyone in the vicinity who overhears what you're doing. Since I record at home and I live in a small house, my family has to endure such indignities on a regular basis.
Sometimes, the noises made aren't even real words; they're just noises (a bit like a Geordie accent, really*) that act as a sort of placeholder for the lyrics when (and if) they finally come to you. Other times, phrases that have no business being anywhere close to a song tumble out from Lord-knows-where and make you question your own sanity. Once in a while though, you'll vomit up a line that excites you, and you realise that you can build a song around it. Some might consider it profound and poetic; others may find it closer to peurile or pathetic (and various other terms beginning with "p") but, it hardly matters. When that moment of recognition happens to you, and the words actually please you, it can be exhilarating. And it keeps you coming back for more.
In this instance (please excuse the soul baring here - I'm cringing, if that helps) the rather daft, and certainly cringe-worthy phrase - "Hide behind the corner, hide behind that tree" tumbled out of my mouth. (Ugh.) But, before I had the chance to roll my eyes in disgust, the line - "You'll find love is real" had tumbled out of mouth and plopped into my lap, and I thought - Love is Real, there's your song, dear boy.
So, all the other lyrical snippets (including any and all mystifying tree references) were stripped away and all I had to do was piece together the rest of the song around that phrase. Just like that, it went from a whiny 'love is nothing but a pain in the arse' lament, to an exulting 'love is everything' lullaby.
Like I said, whether it's good, bad or mediocre, hardly matters, really. For me, the process is just so thrilling. Sometimes they take days to blossom; sometimes they take decades, and sometimes they don't flower at all. I really don't understand how songs happen, or for that matter why I've suddenly taken to using flowery metaphors. What I do know is that I'm just grateful for every little brush against the beautiful mystery that is songwriting.
What does any of this have to do with the old film clip from "The Sealed Room" that I snared for this little video? I'm buggered if I know, although on reflection, a sealed room might be perfect for any future songwriting brainstorming sessions. It's certainly be appreciated by my poor family and neighbours. Nah, I'm just a sucker for these old silent films. This one features a minstrel who looks like he just stepped out of an old Monty Python sketch. Good enough for me.

* No offence intended to Tynesiders; I've recently been immersed in Steve Coogan's "I'm Alan Partridge" TV series and it's rubbing off on me I'm afraid.
Posted by Steve Robinson at 12:25 PM No comments: