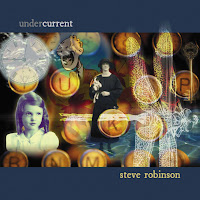 Plans for the release of the new CD, "Undercurrent" are going swimmingly...

It's been over two years since the release of "Away For The Day", and one would think that I've had ample time to leisurely work on this follow-up record. One would be bloody well mistaken.

For various reasons (most of them my fault) the CD pressing deadline I had, turned out to be a rather concrete one, so the last couple of months have been an insane, mad dash to the finish line. The reasons why aren't really important; what IS important is that I publicly acknowledge the Herculean efforts of my friends and co-producers, Ed Woltil and Brian Merrill, without whom this posting would be an apology for an unfinished project rather than a release date announcement.

Yes, for want of a better term, Ed and Brian saved my sorry arse. What started as a casual, good-natured invitation to embellish my half-finished home-recorded tracks at Brian's studio B, quickly became a succession of hastily scheduled, late-night recording and mixing sessions that proved to be essential in ensuring that "Undercurrent" was released as an LP rather than an EP.

Fueled by Ed and Brian's boundless energy, enthusiasm (and the occasional Belgian Trappist ale), drum tracks, electric guitars and bass tracks were somehow miraculously recorded in time to meet the rapidly approaching deadline. In between sessions, Ed continued to somehow find the time to add his always sympathetic (and at times telepathic) touch to my songs, even co-writing one of them ("Class Clown"), as well as programming additional parts at his own home studio. Yes, schedules were interrupted and sleep was sacrificed; there was even rumours of Brian being seen mixing in his pyjamas. Be that as it may, the bottom line is that the two of these fine gentlemen went so far above and beyond the call of duty, that it verges on the embarrassing. I remain in awe of their tenacity and talent, and I thank them from the heart of my bottom.

So, who's on it? Well... unlike the last DIY effort, this one is a more collaborative affair. Aside from the aforementioned input from Mr Woltil, "Undercurrent" also features veteran drummer Chuck Darling(Nineveh Project); a guest spot from young Celtic fiddler Victor Gagnon(Seven Nations, Rathkeltair), as well as some harmony vocal help from my ten year-old daughter,Emma, who managed to nail her parts in two takes (her dad could learn a thing or two).

As far as the songs go...there's an unapologetically Beatle-ish pop song of love and commitment (Love Is Real); a Celtic-tinged folk-rock expression of awe at the bond between a parent and a child (Please Emmalene); a nursery rhyme-infused homage to a dearly departed mother (Wooden Hill), and an old-timey, music hall-influenced singalong remembrance of schooldays past (The Best Days Of Your Life).

Lest this all sounds a little too much like an exercise in ever-sentimental, rose-tinted nostalgia, I also tossed in a rather disquieting strangled-folk rumination on global religious conflict (Road To Ruin); a tale of drunken excess, emotional disconnect and failed ambition(Wasted And Waiting) and an apologetic lament on the pervasive celebrity worship culture that we humans seem content to wallow in (Boring God). A little undercurrent, you might say.

And where might one purchase said confection? Well, I'm expecting to have CDs in hand by May 24th; retail outlets like CDBaby,Kool Kat Musik,Woven Wheat Whispers, and Not Lame etc., should have them a few days after. I'll post details as soon as I have them. If you prefer, you could always e-mail me via the website, and for the paltry sum of $12, I'll send one directly to you. No messing. I'll not even charge you for shipping and mishandling. Of course, it will be arriving via carrier pigeon, but you know what they say about looking a gift horse in the beak...
Posted by Steve Robinson at 9:27 AM No comments: