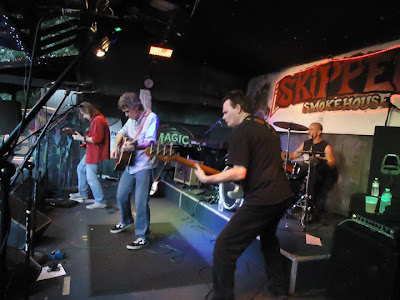 I'm the best singer ever.

I know this because my daughter, Emma, told me so after witnessing The Headlights' appearance at the 30th Anniversary extravaganza at Skipper's Smokehouse, this past Saturday night.

It's important to note that Emma is now thirteen, and that if she's ever within earshot of any of her peers, my very presence is usually cause for alarm (or merely embarrassment, if I'm lucky). I get the feeling that if I were to actually engage in conversation with any of her friends, it would cause severe emotional scarring from which she might never recover. On this day though, I was "cool" to her (or as close to "cool" as I'll ever get) and my goodness, was it ever fun while it lasted.

Throughout the set, she stood close to the stage, snapping pictures on her phone and beaming from ear to ear (of course, she may or may not have been taking pictures of me, I don't know, but let's not spoil the illusion). After the set, she came up and gave me a big hug and we posed for a photo or two together in the backstage area. All in all, a lovely time.

On Sunday night, I was on my way to bed when I noticed Emma's light was still on. I was slightly irked, since it was quite late and she knew full well that she had to get up early for school the next day. I went in to her room intending to voice my displeasure, but before I had a chance to speak, she intercepted me with the zinger: "You're the best singer ever, dad!"

Was she buttering me up, safe in the knowledge that I'd become all jellyfish-like in the face of such flattery? Maybe. Not only that, I'd doubt that she thinks I'm the best singer out there, and that I pale in comparison to any of the Jonas Brothers (and maybe even their distant cousins) but it still might have been my finest hour.

Either way though, I think I may have the best daughter ever.
Posted by Steve Robinson at 11:38 AM 1 comment: