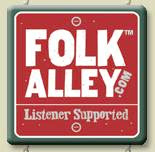 Random Public Service Announcement:
FolkAlley.com went online in September 2003, offering live-streaming music over the Internet 24 hours a day. The hosted stream is produced by WKSU-FM in Kent, OH, which also built and maintains the web site. The Folk Alley playlist is created by senior host, Jim Blum, and Folk Alley Music Director Linda Fahey and features a distinctive blend of the best of singer/songwriter, Celtic, acoustic, Americana, traditional, and world sounds.
FolkAlley.com is listener supported and relies on donations and sponsorships to fund the web site and the music streams. Folk Music is disappearing from radio playlists and store shelves. Folk Alley aims to reverse this trend by bringing traditional, Celtic, bluegrass, Americana, singer/songwriter, acoustic and world styles to music lovers – young and old – around the globe through the Internet. Click Here  to make a donation today.
Yes, Folk Alley is a bit of a treasure and deserves our support. I should add that his has absolutely nothing to do with the fact that they just selected me as their Open Mic Artist of the Month.
Posted by Steve Robinson at 11:03 AM