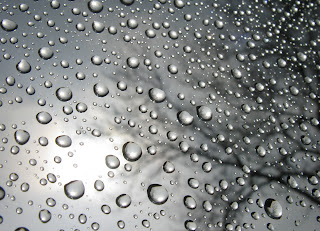 What has happened to weather forecasts? It used to be that you'd have this reassuring, crusty old TV voice letting you know in a couple of terse sentences exactly what weather conditions to expect in the coming hours -  "Mostly sunny this morning, followed by increasing clouds and a chance of a stray shower during the early evening hours." Or, as was quite often the case in the UK, "Rainy this morning, becoming showery later."

I miss that. Now, of course, we have so much extraneous information that it's hard to see the torrents for the breeze. We go online to any one of several hundred thousand weather sites scattered about the interwebs, where we're regaled with endless charts, graphs and interactive radar images all showing you what the weather was like during the past hour. Want to know how many cloud to ground lightning strikes occurred this morning? No problem. Today's pollen count? Click here. Perhaps you'd like to see a time-lapse visual (courtesy of our very own radar with a cutesy name) where you can see the exact movement rain showers that popped up earlier this morning? Step right this way...

Given the  technology on display, you'd think that finding out whether or not you'll be needing your brolly during the coming afternoon hours would be a straightforward affair. Alas no. With eye-catching distractions like the Marine Forecast, Ragweed Report and the ubiquitous Tropical Update Designed To Scare The Crap Out Of You As Soon As It Gets Cloudy Over The Cape Verde Islands, the actual forecast can easily get lost in the haze (no sunny pun intended).

At work today, I spent a several minutes on a local news website trying to gauge the chances of rain this very afternoon, but instead came away armed only with stats concerning current visibility, wind speeds and assorted regional rainfall totals during the past 24 hours. On the weather page in question, the main graphic was an oversized map of our region, which might have been helpful if there had been something informative superimposed on it, like, "Rain is very likely here during the next 2 hours; bring an umbrella or your hairdo will be as flat as a fart within minutes" or even, "Not a cloud in the sky here; wear your sunscreen or perish, lobster boy." That's information I could definitely use. Instead, the map was plastered with a plethora of mostly identical numbers representing current local temperatures.

Whose idea was this? Has anyone embroiled in a Florida summer ever made a decision on whether or not to go outside based on the temperature? It's summer! You know full well that it's going to be between 88 and 92 degrees. Every. Bastard. Day. And every night it will be in the mid to high clammy 70s. Is anyone really interested in an occasional one-degree difference in the daytime high between towns five miles apart? What possible difference could it make? These numbers should all be replaced with a single line of copy over the map that simply says, "Miserably to unbearably hot and sticky until sometime in late October. Or maybe November."

Perplexed by this soggy information overload, I did something quite extraordinary. Taking a breather, I tore myself away from the computer, walked out into the lunch room and took a peek out of the window. A real window, with a view and everything.